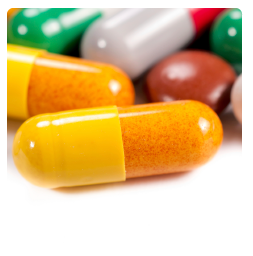 Type II diabetes is currently one of the fastest growing epidemics in known human history. It is generally agreed to be closely associated with obesity, with various clinical manifestations. Besides, multiple risks factors are involved in the causation of diabetes.

Moreover, diabetes has a progressive nature with no cure at present. Disease control is performed by continuous monitoring and re-assessment of diabetic management measures.

Prognosis of the disease usually leads to intensification of therapy with increasing dose of OHA, including insulin, according to the generally accepted algorithms provided by American Diabetes Association. [1]

ADA diabetes treatment algorithms suggested lifestyle modification for patients at risk of diabetes. Once patients are diagnosed, metformin mono-therapy is the recommended first line treatment, followed by additional second-line medications if HbA1C target levels has not been achieved. Eventually, it will be the use of insulin.

In a randomized, non-blinded, one-center trial, the efficacy of intensive medication treatment was compared with the combination of medication and bariatric surgery, either Roux-en-Y gastric bypass or sleeve gastrectomy in 150 obese patients with uncontrollable type 2 diabetes. The primary end point of the trial was the proportion of patients with glycated hemoglobin level (HbA1c) 6.0% or less at 12 months after treatment. Moreover, change in fasting plasma glucose, average numbers of diabetes medications and change in BMI were the second end points of the trial.

It is concluded that 12 months of combined treatment of medication and bariatric surgery could significantly achieve glycemic control than medication alone, as only 12% of patients were able to reach the first end point, versus 42% in the gastric bypass group and 37% in the sleeve-gastrectomy group. The results of the other end points were shown in Figure 1. 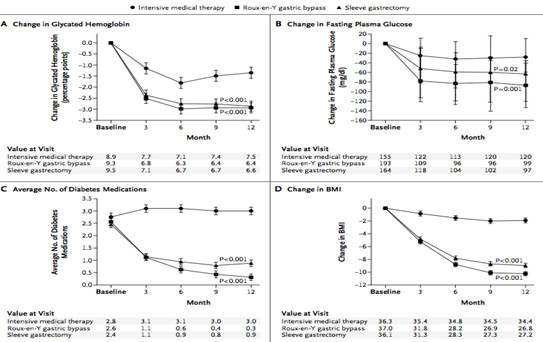 In another randomized, single-center, non-blinded, controlled trial, 60 patients with BMI over 35, a history of type II diabetes for over 5 years and HbA1c level over 7.0% were given either conventional mediation therapy or bariatric surgery. Two types of bariatric surgery were selected in the trial, which are gastric bypass and biliopancreatic diversion. The rate of remission of diabetes after 2 years was selected as the primary end point of the trial, defined as fasting blood glucose level less than 5.6mmol/L and HbA1c level less than 6.5% without the use of medication.

After two years of follow-up, bariatric surgery had resulted in better glycemic control than medication therapy alone. For the primary end point, one of the patients in the medical therapy group had any diabetes remission, compared with 75% in gastric bypass group and 95% in the biliopancreatic-diversion group. (Figure 2) Also, the average glycated hemoglobin level had decreased in all groups, though surgical groups had the most significant degree of improvement. 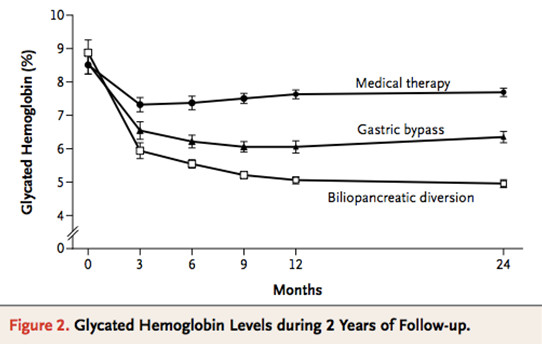 As reported in a meta-analysis published in 2004, bariatric surgery is shown to be effective for the majority of morbidly obese patients in terms of weight loss, as well as resolving or achieving complete resolution in obesity related co-morbidities, such as diabetes, hyperlipidemia, hypertension and obstructive sleep apnea.

The effectiveness of bariatric surgery has received recognition in the medical field. The International Diabetes Federation had recommended physicians to include bariatric surgery in the treatment plan for obese patients with type II diabetes and BMI over 35, or as a treatment option for those BMI ranged 30-35 in uncontrolled type II diabetics. On the other hand, recommended BMI should be lowered by 2.5 for Asians due to strong genetic predisposition.